Being diagnosed with Parkinson’s disease can have a detrimental effect on someone’s well-being. Some people may be better at handling the seriousness of the disease than others, with some turning to a weighted blanket for Parkinson’s disease as a way to help deal with it throughout their life.

It’s never ideal for someone to ignore their disease in the first place. It’s an awful reality for anyone to experience something they can’t control, and it’s a shame it happens to people at all. Of the dreadful diseases that plague humanity, according to parkinson.org, more than 60,000 Americans are diagnosed with Parkinson’s disease a year.

Although 60,000 might not seem like a lot, it’s terrible for those who are diagnosed with it, leading to the question of how people deal with it. Thankfully, medicine and treatment have only gotten better over the years for people to deal with this disease.

Unfortunately, there isn’t a cure for Parkinson’s disease. However, various treatments allow Parkinson’s patients to maintain a good quality of life still. Coping and maintaining is the ideal way for someone with a condition like this to continue pushing forward.

Nevertheless, where you or someone you know recently diagnosed with Parkinson’s disease? Or, do you feel you have the early symptoms of the disease? Try not to worry, as we’ll discuss what the condition is, symptoms of it, treatment, and much more.

Parkinson’s disease affects roughly six million people around the world. The complications that it brings are not fatal unto themselves but can cause a reduced life expectancy. One of the complications that those who suffer from the disease experience is a lack of proper sleep. The difficulty in keeping the body calm makes it difficult to properly fall asleep. That is where using a weighted blanket for Parkinson’s can help.

While there are many treatments for the disease, a weighted blanket can be used by almost everyone who is afflicted with this condition. It’s designed to help them fall asleep faster and remain asleep all night long. By using natural, proven technology, the best weighted blanket for Parkinson’s comes from Namaste, a company that excels at making weighted blankets for several different types of conditions.

Disclaimer: The tips and recommendations given at Namaste Blankets are intended to be used as guidelines. Do not replace our advice with a registered health professional or therapist’s advice. It’s best to consult with a healthcare professional if you have a special condition. 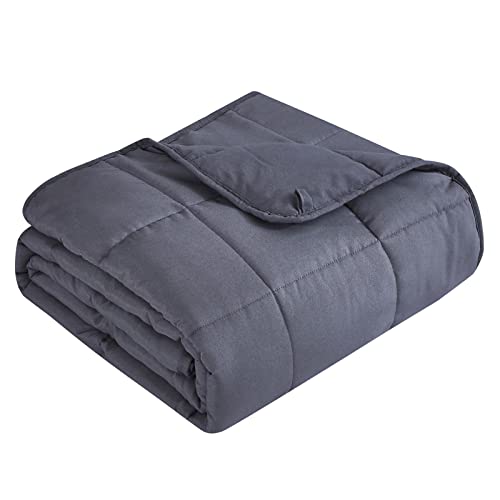 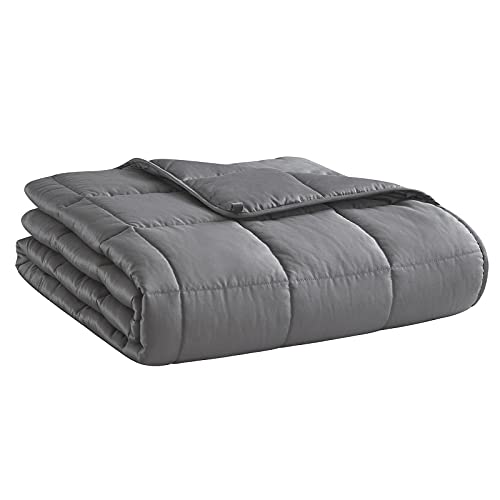 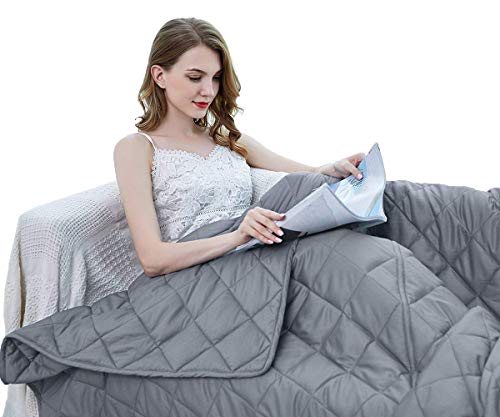 What is Parkinson’s Disease?

For those who don’t know, Parkinson’s disease is a disease that affects the central nervous system, causing it to affect people’s movement, often causing tremors. The disease tends to occur as a result of nerve cell damage in the brain.

The substantia nigra is responsible for producing dopamine, and a loss of nerve cells in this part of the brain is what develops the disease. Since there isn’t any modern way of producing replacement nerve cells, the only viable treatment option is to delay the disease and not let it worsen.

Often, people notice a shake in one of their hands and choose to ignore thinking it’ll go away. Unfortunately, the disease begins to worsen and can cause someone a significant amount of harm unless they can properly treat it before it gets to the point of no return.

Although the disease doesn’t have the ability to kill someone, it can place a tremendous overall strain on the body and cause people to be susceptible to illness. As a significant weakness of the immune system, it’s always a difficult disease for people to deal with.

Fortunately, because of the internet, and our overall increased knowledge of the disease, the symptoms of Parkinson’s disease are more laid out for people to realize they have it. If you happen to have one of these symptoms, try not to overreact yet, since any of these symptoms can result from something else.

However, if you want to be sure of the situation, don’t hesitate to reach out to your doctor for further analysis. They’ll be able to point you in the right direction, and it’s never ideal to self-diagnose yourself with anything, especially something as serious as Parkinson’s disease.

Here are the main symptoms of Parkinson’s disease:

Tremors are the most common symptoms of Parkinson’s disease, causing people to have an involuntary quivering movement. Most patients experience tremors in their hands before anything else, but they tend to occur throughout the entire body.

Since Parkinson’s causes a significant amount of nerve damage, speech changes tend to be very common for the disease. People typically have slurred speech, causing them to not be as straightforward or fast as they usually are.

Tremors and the overall force of Parkinson’s on the body cause patients to have an impaired posture and balance. They have a difficult time standing up straight like they once did, and their balance tends to be lacking due to it.

Muscle aches tend to be an extended-term that’s associated with any disease, regardless of whether you’re discussing Parkinson’s or not. Still, it’s way too familiar for people who are diagnosed with Parkinson’s to ignore. Aches and pains typically occur all over the body.

Since Parkinson’s causes several tremors and aches throughout the body, most patients tend to see a massive change in their writing. Writing is a lot more critical than most people realize, and always having shaky hands makes it almost an impossible task.

Automatic movements such as blinking, smiling, or swinging your arms are widespread and easy for us to do. However, Parkinson’s typically causes people to not control their automatic movements, meaning they’ll have to work very hard to do so.

Since Parkinson’s patients have difficulty dealing with tremors and other aches, it’s prevalent for them to have slower movement. Often, the shakes and tremors overtake the ability to walk like they once did, forcing them to move at a slower pace.

Although there isn’t a known cure for Parkinson’s disease, there is more information on ways to help live with the disease. Previously, patients were struck with the disease and forced to deal with the full totality of it without any real comfort.

As with any other disease, there are plenty of medications available that help treat the symptoms of Parkinson’s. Although they don’t actually cure the disease, they help reduce pain, tremors, aches, and much more that are common with the disease.

As with anything, exercising is vital when it comes to being able to live a happy and full lifestyle. Although exercising might be very challenging while having Parkinson’s, aerobic exercises such as walking can significantly benefit someone while dealing with the disease.

Physical therapy is a considerable part for someone with Parkinson’s, as it can be exceedingly difficult for them to deal with tremors and various other aches they’re not used to. Physical therapy can help them do their everyday tasks while dealing with the issues plagued by the disease.

What is a Weighted Blanket?

For those who don’t know, a weighted blanket is precisely what it sounds like, a blanket that has added weight to it. The weight itself tends to vary on what it is, and the actual weight. Depending on the company, they might utilize, glass beads, sand, pellets, and various other weights for their blanket.

Most tend to cite glass beads as the best for weighted blankets since they’re the most durable and most versatile. Other than the weight, be mindful of the material and weight you decide, since both will play a crucial role in how well it works.

How do Weighted Blankets Work?

Weighted blankets work like any other blanket, but with the added weight, it helps users obtain a calming peace of mind, allowing them to relax and rid their body of any added stresses. Since stress is such a significant component of any disease, it’s excellent for a weighted blanket to help a person achieve a great sense of mind.

For those who wonder are weighted blankets are good for Parkinson’s, the answer can be found in the deep touch pressure they provide. By applying gentle, even pressure across the body, it helps to calm the mind and body in a safe, natural way. The pressure is similar in effect to a swaddling cloth used to wrap babies to help them feel more comfortable and fall asleep faster.

Combined with the deep pressure touch, Namaste uses organic materials, most notably cotton, to wrap the glass beads which provides maximum comfort. Add to this the glass bead technology and this helps those who suffer from Parkinson’s to sleep better at night.

As some studies demonstrate, the weighted blanket helps trigger the body to release dopamine. A natural hormone that helps to calm the mind and body when trying to fall asleep. The result is getting a deeper, better night’s sleep thanks to using the weighted blanket.

What is a Namaste Weighted Blanket?

This is a blanket that contains a series of glass beads that are spread evenly inside layers of organic cotton. For over 10 years, Namaste has perfected the weighted blanket by combining cotton with glass beads that offer gentle pressure while you sleep.

By providing extra quality both in the use of natural materials and in the construction of the blanket, Namaste has created a remarkable treatment for those with Parkinson’s who have difficulty falling asleep.

Why Get a Namaste Blanket?

There are good reasons why you should choose a Namaste weighted blanket for Parkinson’s. Starting with the fact that you can choose from different weights and sizes suitable for children and adults. But there are other good reasons as well.

How to Choose the Right Size and Weight

For the actual weight, most experts will recommend getting a blanket that’s roughly ten percent of your weight. For example, if you’re 150 pounds, you should seek out a weighted blanket that’s 15 pounds. As for the size, you typically want the blanket to cover your entire body, so make sure you get one that’s longer than your height.

Now, if you’re searching for the best weighted blanket for parkinson’s disease, be sure to take a close look and see which size and weight are best for you.

Hopefully, you enjoyed this article on Parkinson’s disease and the overall discussion on a weighted blanket for Parkinson’s disease. If you’re confused or have any more questions about the terrible disease, be sure to reach out to your doctor as they’ll be able to help you live like you usually would with a bit of adjustment.

With more than a decade of experience, Namaste is a leader in the weighted blanket industry. Thanks in large part to the use of glass bead technology which is superior to plastic weights or sand pellets. Glass beads provide the right amount of pressure while being comfortably wrapped in 100% cotton. 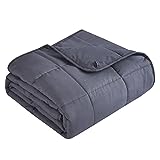 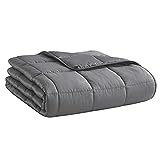 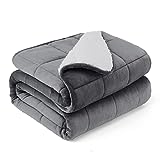 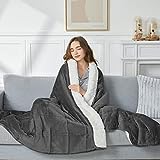